Over the Christmas and New Year holidays I had a chance to catch up with some processing of negs – I still have 4 rolls of 120 film (1 x Efke IR and 3 x Ilford FP 4) and 5  x 35mm (Ilford HP5) to catch up on  though!  The main reason for doing the processing was to see what the  pictures taken with my latest acquisition (a Zeiss Ikon Nettar folding camera) were like. 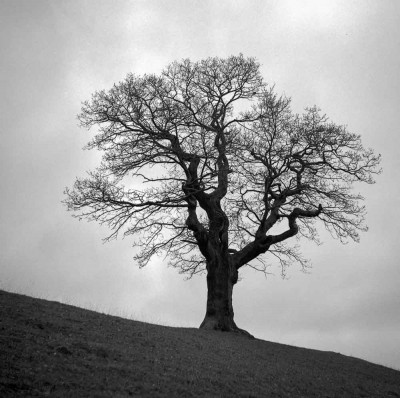 This simple shot was the second I took with the Zeiss Ikon Nettar.  I have to say I was quite impressed for such a simple camera – no metering and no coupled view finder, so you have to dial in the distance between you and the subject and then hope!  What let (all of) the image(s) down was my processing, with a chatty 5 year old helping me I didn’t wash the negatives enough and the resulted in streaks and spotting – which I haven’t done in years.  That said, after a small amount of tidying up in Lightroom I produced the image that is above.  Then something interesting happened, I posted it on Flickr as I do with most of the shots I’m happy with, and it all went a little bit mental.  At present the photograph on Flickr has received 371 views and 33 favourites – which for me is quite a lot of interest – more so when I think that the image is good, but not great.

But it doesn’t end there.  In the same batch of processing was a 35mm roll of film from my much neglected Hasselbald Xpan.  The neglect was proven by the fact that some of the shots on the roll date back to July 2011.  One of the shots I was quite taken with, again good (after clearing the water marks), but not great and somewhat of a cliché as well.

This I took on a one day workshop with David Ward in the Suffolk village of Southwold as the day was drawing to an end.  Once again I added the photograph to Flickr and it went all a bit mad – 869 views and 116 favourites!

Where’s the logic and reason for this that two simple photographs can so quickly get recognised and “Explored” on Flickr, when something a bit more thoughtful and dare I say it less clichéd doesn’t get the same attention? (And I’m not talking exclusively about my own work when I say this)  Is it that people in general like simple things with simple compositions versus a more complex image that requires time to absorb the nuance of it?  There seems to be no clear logic as to what makes something popular (or not) on Flickr – I did think over saturated contrived images got the most attention, but having had so much attention over these two images that appears  not to be the case.

I’m not going to lose sleep over the whys and wherefores, but it does confuse me (a bit).  It is very flattering to receive so much attention (albeit for a brief moment of internet time) , but in the end it doesn’t drive the traffic to this site and it doesn’t make me suddenly get recognised as the next Edward Weston – so back to the grindstone 🙂