We are, I guess, in the non-season between Autumn and Winter, where the trees are on the whole de-nuded of leaves, but its yet to be “properly” cold to have frost on the ground (well in South Yorkshire at least).

I started this Autumn thinking that I was going to miss it and all its glory, and I probably on the whole did  miss it, as the actual bit of Autumn where you have golden colours in the trees was very brief – not helped by some heavy rain and high winds which would have helped the leaves on their downward decent.  My biggest regret was that I didn’t get to visit a spot that I had reccied out in The Peaks during the summer that held a lot of potential.  This was further compounded by not being able to get to the Lake District this year for my usual camper van trip, as said camper van was broken 🙁 (Its fixed now!)

That said I have, I feel, made the best of the time that I have had to get out in the Autumn and have created possibly the best photography of Autumn that I have to date.

Clumber Park is a great location to visit with mixed woodland and a lake that usually has mist long after it has cleared from the surrounding country side.

Padley Gorge in the Derbyshire Peak District (or Padleygeddon as I sometimes call it) is one of those classic Autumnal go to locations.  That said, for all its honey pot qualities, I always wonder how many great locations people drive past to come here in the Autumn that are closer to their homes (its 20 mins from my home).  I was only here for half a day at the very end of October and in Lower Padley, towards  Grindleford Station, the trees were bare.  Thankfully at the upper end of Padley Gorge there was still some colour where I got to use my Fujifilm Velvia 50 on and some Kodak Portra 160 as well.

So instead of widening my horizons, I’m constricting them.  Lady Canning’s Plantation is on Ringinglow Road in Sheffield on the way out to Higger Tor in the Peak Distirct and can’t be more than 10 minutes drive from my house.  In fact the Peak District boundary is only a couple of hundred yards from this wood.  The wood is mainly of pine, but there are some deciduous areas near the main road which add to the place.

Weir, near Ashford in the Water, Derbyshire Peak District

A mention for Paul Newcombe, who shared this location on Flickr.  Its a lovely location, complete with three mills of varying types – you just need a smoke generator and it would be perfect (#joke!).  (also visiting a couple of weeks earlier would have been better too). 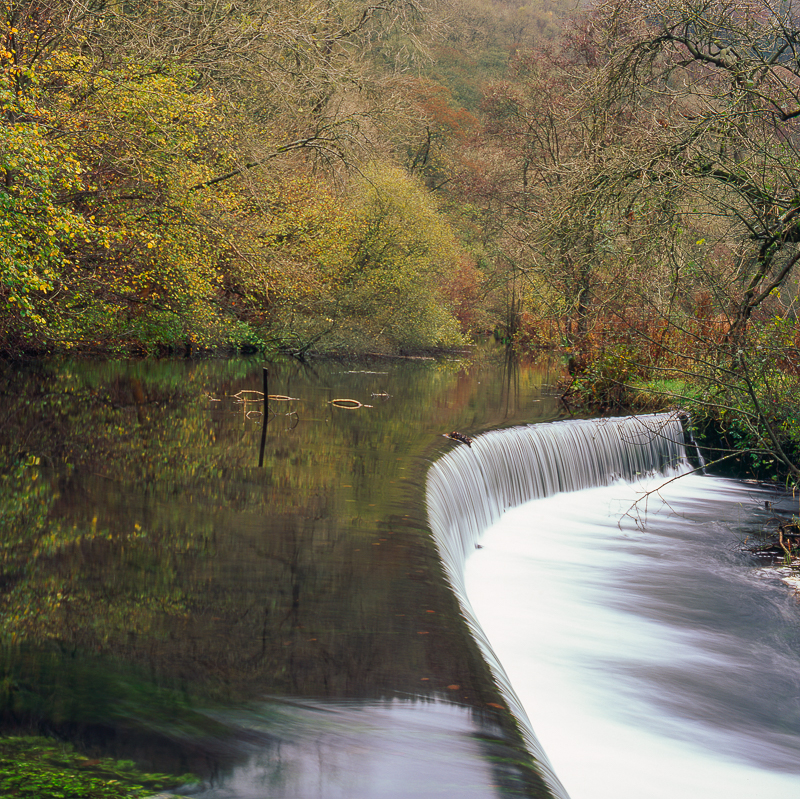